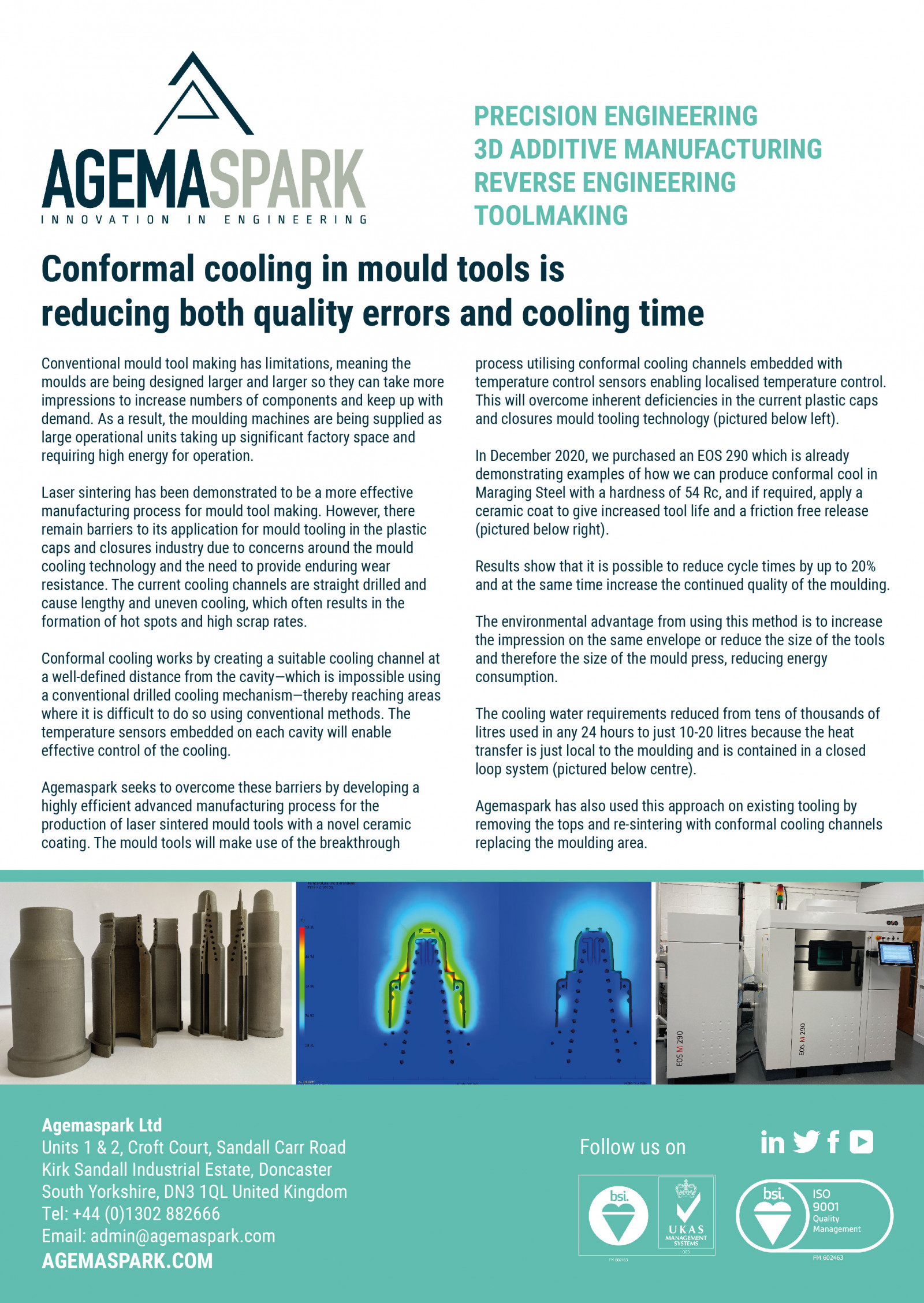 Conventional mould tool making has limitations, meaning the moulds are being designed larger and larger so they can take more impressions to increase numbers of components and keep up with demand. As a result, the moulding machines are being supplied as large operational units taking up significant factory space and requiring high energy for operation.

Laser sintering has been demonstrated to be a more effective manufacturing process for mould tool making. However, there remain barriers to its application for mould tooling in the plastic caps and closures industry due to concerns around the mould cooling technology and the need to provide enduring wear resistance. The current cooling channels are straight drilled and cause lengthy and uneven cooling, which often results in the formation of hot spots and high scrap rates.

Conformal cooling works by creating a suitable cooling channel at a well-defined distance from the cavity—which is impossible using a conventional drilled cooling mechanism—thereby reaching areas where it is difficult to do so using conventional methods. The temperature sensors embedded on each cavity will enable effective control of the cooling.

Agemaspark seeks to overcome these barriers by developing a highly efficient advanced manufacturing process for the production of laser sintered mould tools with a novel ceramic coating. The mould tools will make use of the breakthrough process utilising conformal cooling channels embedded with temperature control sensors enabling localised temperature control. This will overcome inherent deficiencies in the current plastic caps and closures mould tooling technology (pictured below left).

In December 2020, we purchased an EOS 290 which is already demonstrating examples of how we can produce conformal cool in Maraging Steel with a hardness of 54 Rc, and if required, apply a ceramic coat to give increased tool life and a friction free release (pictured below right).

Results show that it is possible to reduce cycle times by up to 20% and at the same time increase the continued quality of the moulding.

The environmental advantage from using this method is to increase the impression on the same envelope or reduce the size of the tools and therefore the size of the mould press, reducing energy consumption.

The cooling water requirements reduced from tens of thousands of litres used in any 24 hours to just 10-20 litres because the heat transfer is just local to the moulding and is contained in a closed loop system (pictured below centre).

Agemaspark has also used this approach on existing tooling by removing the tops and re-sintering with conformal cooling channels replacing the moulding area.